In the beginning, IRCAM was entirely underground, located under the fountain designed by Niki de Saint-Phalle and Jean Tinguely on the Place Igor-Stravinsky. In 1990, the tower designed by Renzo Piano was erected on the corner of the Piazza, making IRCAM a visual element of Paris' urban landscape. Since 1996, the institute façade has become a hybrid, including two other disparate spaces adjoining the tower; the former Jules-Ferry school and a building that once housed the public baths (Bains-Douches).

The Espace de projection is a variable acoustics hall that can be used as a concert hall, a recording studio, or for room acoustic experiments. This space a structure independent of the rest of the building, therefore isolated from outside noises and vibrations. The largest space in IRCAM, this space is the building's zenith. 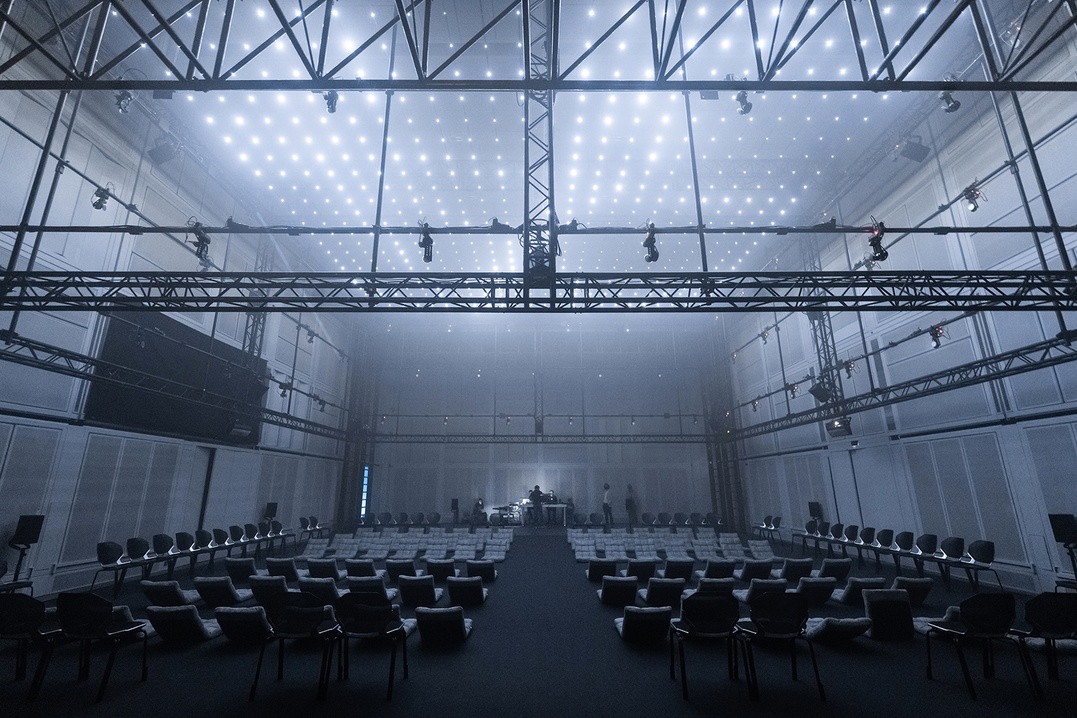 Audio equipment: an innovative multi-channel sound spatialization system
Both a research tool and subject, the Espro's audio equipment combines two cutting-edge systems for sound field reproduction: WFS (sound hologram synthesis) and Ambisonics (3D sound immersion). The room features a WFS system consisting of a 264-speaker array evenly distributed around the stage and the audience and a 75-speaker dome for three-dimensional Ambisonic sound diffusion. These 339 loudspeakers are controlled by a set of computers that manage multiple sound source spatialisation in real-time.

This system was installed with the support of the Ile-de-France region (Sesame equipment program), the CNRS, and Sorbonne University. 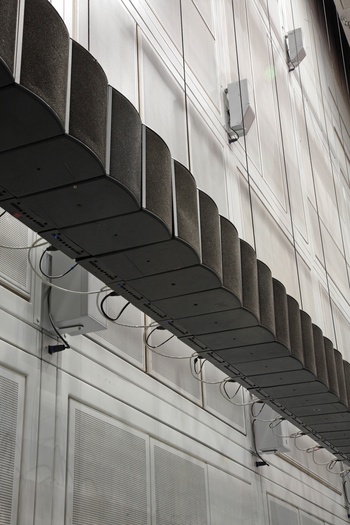 Variable Acoustics
The Espace de projection was built with the intention to provide the largest variability possible with regard to form, volume, and acoustical properties. To change the volume and shape of the room the height of the three ceiling panels can be varied independently; a roller curtain then separates the different sub-spaces. The walls and ceiling panels consist of rotatable prismatic modules, called periactes, with three material surfaces: absorbent, reflective, and diffusing. There are 171 groups of three periactes, which can be independently controlled by an electro-mechanic system. This makes it possible to change both the reverberation time and the early and late reflection patterns of the room. 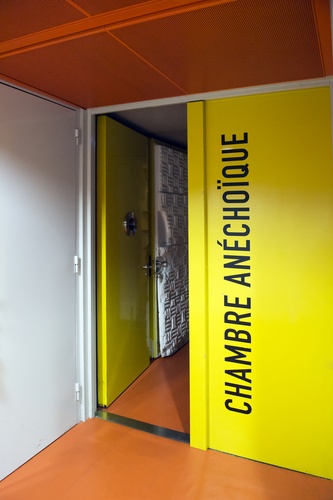 An anechoic chamber is a room for acoustic experiments that absorbs as much sound as possible. The ceiling, floor and walls are covered with fiberglass wedge-shaped panels that absorb almost all the acoustic energy. Therefore the sound propagates in space without reflections, a situation that artificially recreates what physicians call "free field conditions".

Principle Functions
The anechoic chamber is used primarily to measure the radiation characteristics of sound sources. Numerous studies have shown that the radiation patterns of natural sound sources vary with frequency and time. If we use the example of a musical instrument, its radiated acoustic field depends on the note played, on the type of instrument, and other parameters. To measure radiation patterns, it is necessary to separate the direct field radiated by the instrument and the field reflected by the room's surfaces. In an anechoic situation the reflected acoustic energy is negligible and thus only the free-field radiation is measured. The anechoic chamber is also used as a "quiet" room. Measuring very precise sounds necessitates a very low recording level, without any background noise. Extremely well isolated from the outside and the rest of the building (a sort of a box in a box mounted on neoprene silent blocks), this room makes it possible to have a satisfactory signal/noise relationship. 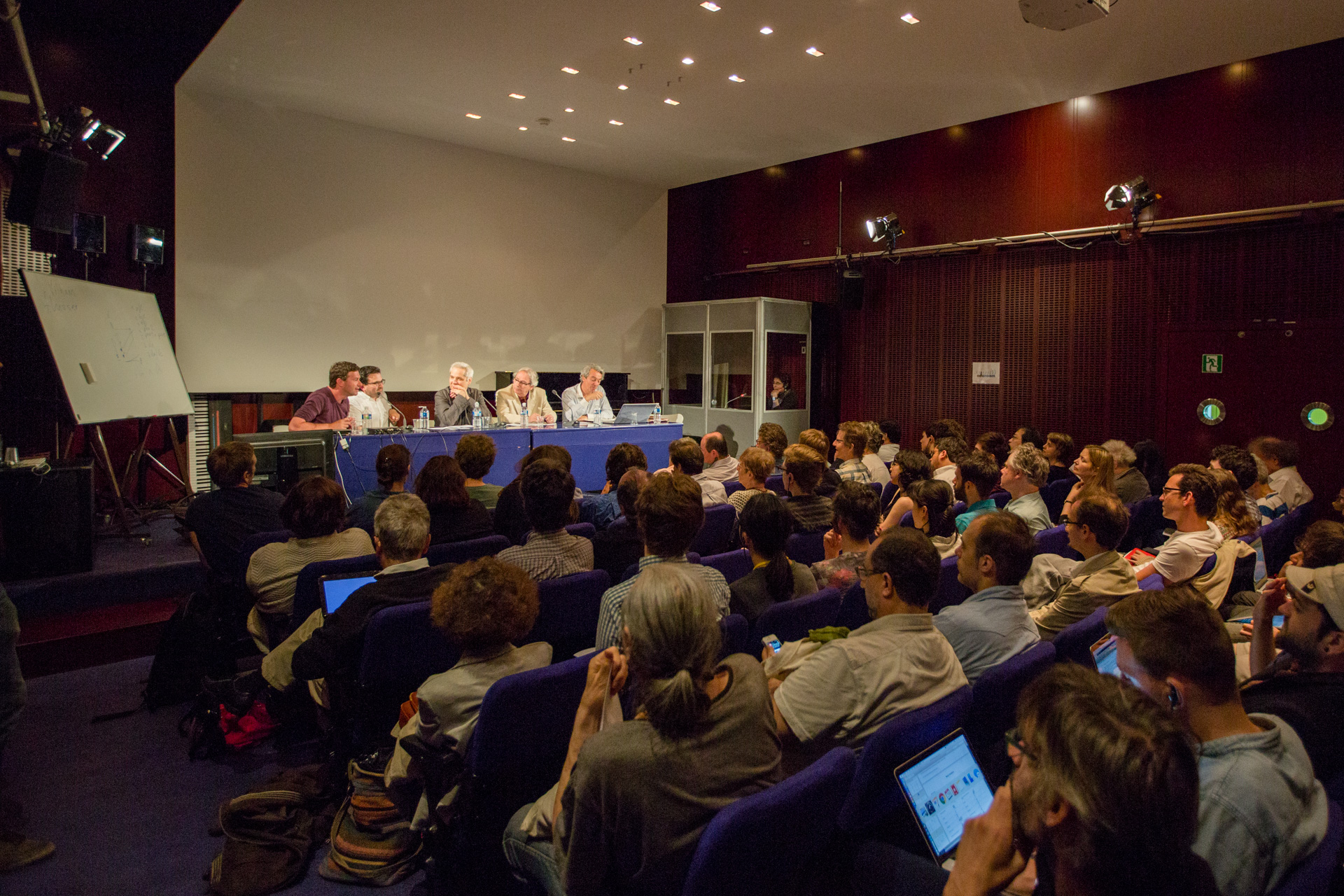