One of the sine qua non conditions for the acceptance of an artistic research residency project at Ircam is that the technological stakes of the project resonate with the concerns of the research teams. Led by the composer Aki Ito and the researcher Jean-Philippe Lambert, the "Asterisms" project is no exception and is part of the work of the Sound Music Movement Interaction team, directed by Frédéric Bevilacqua, and particularly that of Benjamin Matuszewski. 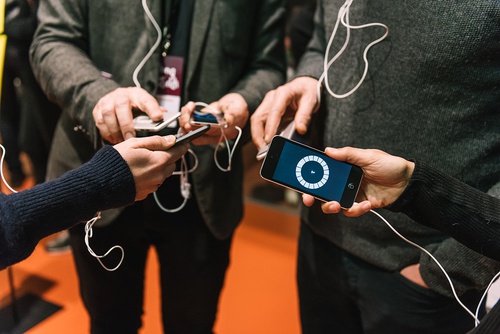 For several years now, the Sound Music Movement Interaction (SMMI) team has been exploring different types of collective sound interaction. That is to say, making several agents (people, terminals, loudspeakers) interact through gestures and sound. This is how the team is experimenting with the capture and tracking of gestures. In the case of "Asterisms", the challenge is to make different sound objects with different interfaces interact in the same place. The project is partly based on knowledge gathered in the framework of the CoSiMa (Collaborative Situated Media) research project, the aim of which was to develop sound broadcasting technologies based on web tools, using local networks - as is the case for "Asterisks" - which do not use the Internet.

These web tools are obviously present in all mobile phones: "We reuse the hardware and software infrastructure of the phones to set up a system of interactive listening, in real time, between different people in the same place," says Frédéric Bevilacqua. Phones are used as a kind of loudspeaker, never neutral because they are limited in frequency and power, but they are mobile and can be deployed on a large scale. 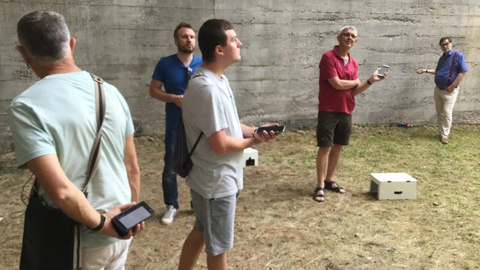 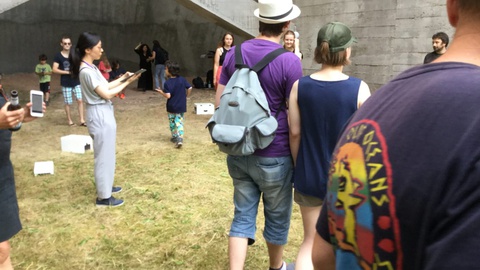 One of the main challenges, of course, is to develop a centralising tool, a sort of mixing console, which allows all the phones to be managed at the same time to distribute and broadcast the sounds according to the musical discourse. In this respect, 'Asterisms' relies on Benjamin Matuszewski's research, and in particular on the Soundworks environment on which he works: "Soundworks," explains the researcher, "is a software framework that allows you to control the broadcasting of a set of distributed sounds.

One of the important issues here is to develop a work interface, a "workflow" or work environment, for the composer, in order to manage as simply, as finely and as fluidly as possible, the networked broadcasting device - a heterogeneous device (because it is composed of different types of telephone) which, moreover, is very dynamic (people can connect and disconnect as they wish).

Aki and Jean-Philippe's residency is very valuable for us, as it allows us to get feedback on the tool we are developing, on what works and what doesn't. This helps us to fine-tune certain details, and to build a more solid and fluid tool. Moreover, we sometimes realise through the artistic process that there are things we don't know how to do, but which we can try to develop. Here, we have come up against all sorts of problems, starting with a point that is essential for certain types of music: the precise synchronisation of networked sound sources, with latency issues that vary according to the phone and the brand.

We will see in the following episodes how these problems were partially or completely solved, or simply circumvented.

Article
During her artistic research residency on a a distributed sound diffusion device "Astérisms" with researcher Jean-Philippe Lambert, composer Aki Ito has produced a few pieces that are used both for t…
News
Creation

Article
On Friday March 25th, during the IRCAM Forum Workshops, Aki Ito and Jean-Philippe Lambert gave a demonstration of their "Asterisms" project, and tested, on the small audience gathered for the occasio…
News
Creation