In many respects Alan T. evokes the world of tomorrow by drawing on the world of yesterday, the following piece, which closes the festival, summons yesterday to inform us about today. For their oratorio The Red Death, Francesco Filidei and his librettist Hannah Dübgen are inspired by Edgar Allan Poe's Mask of the Red Death and Dante's Divine Comedy to tackle a subject of burning relevance: an epidemic and a confinement. 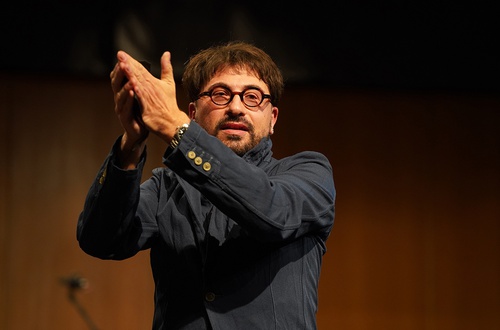 In Poe's novella, a terrible epidemic, the "red death", decimates the country. To escape it, the eccentric prince Prospero confines himself and his courtiers to a walled abbey where he leads a life of debauchery. Seven months later, the isolation and the fear feed impatience and resentment. To calm his fellow sufferers, Prospero devises a purifying ritual: an imaginary journey through Purgatory as described by Dante that will remind everyone of the seven deadly sins. But nothing goes as planned and the evening ends with a sinister surprise.
The libretto itself, written in English with passages in Latin, exudes an elliptical poetry reinforced by the intrinsic rhythm of the versified verb - the last chorus, a swirling literary rondo, is especially successful, and Francesco Filidei's musical treatment takes it into a completely new realm: that of hovering, totally suspended, time.

For his score, Francesco Filidei draws, with relish, from five centuries of repertoire to produce a neo and nevertheless unclassifiable object: neo-classical, neo-medieval, neo-Baroque, neo-impressionism, neo-Bernstein, and, above all, a neo-Bel canto version of verismo.

In spite of this apparent heterogeneity, the result is delightful. Filidei's orchestration skills command admiration - he impressed the SWR Symphony Orchestra, under the baton of Sylvain Cambreling, to the point of awarding him the festival's Prix coup de coeur.

The tuttis are exhilarating, as are the various stylistic exercises, especially the one in the passage on sloth, which covers a large part of contemporary musical trends: post-serial, spectral, bruitism, even neo-classicism—as if Filidei were offering us a thinly veiled critique of the intellectual laziness of his own milieu... And the electronics, produced by Carlo Laurenzi, are not forgotten in this acidic charge against human failings.

Alan T. and The Red Death seem to be very different, and yet they are similar in many aspects. Some are expected, for example their harsh and tender lucidity. Others less so, like the reference, in both performances, to Snow White: a favorite tale of Alan Turing (in which some biographers see an inspiration for the rather original way in which he ended his life, by eating a poisoned apple), it is also found in the mirror in which Prospero's envy is reflected.

by Francesco Filidei (recorded at the Festival de Donaueschingen, 2021)