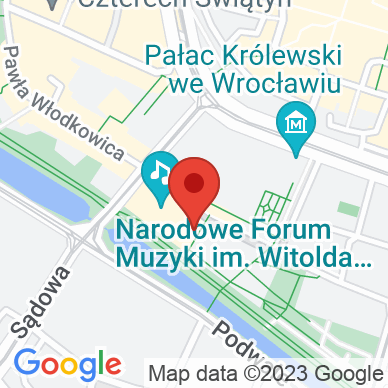 "This two-part piece composed between 2016 and 2017 as my farewell to the MEN festival has no real beginning, and its end paradoxically recalls that non-existent beginning. I wanted to change up the customary concert order and have music playing as soon as the audience started entering the foyer of the fantastic NFM building – a building whose erection I observed from the very start of construction work. Performing this piece is also a scenic endeavor, one where both musicians and listeners are actors. Its goal is to lead the audience into the concert hall where music is already playing – as if it was always there.
I use both the traditional sound of an orchestra, as well as multiple transformations thereof, with the addition of separately composed electronic sounds which blur the distinction between the former two. The spatial composition of the sound was one of my priorities, which is why I placed eight musicians on the balconies of the concert hall and decided on six-channel sound projection for the electronically processed and electronically composed sounds. Sonosphère III & IV is comprised of two discrete pieces which can be performed separately, but which also make up a certain coherent whole. Sonosphère IV starts with a wind instrument sequence similar to the non-beginning of Sonosphère III, and ends with a transformed quotation of that same beginning.
In the process of creating Sonosphère IV, I returned, after a thirty-year break, to working with sound at IRCAM. I would like to thank Frank Madlener offering me this opportunity, and Sébastien Naves for our incredibly creative shared activities and discoveries. Special thanks go to director Andrzej Kosendiak for giving me the inspiration to create this piece."
Elżbieta Sikora

Edit
The commissioning of "Sonosphère III. Wrocław Symphony" by Elżbieta Sikora was co-funded by the Ministry of Culture and National Heritage of Poland as part of the programme ‘Collections’ – Composers Commissions’ realised by the Institute of Music and dance. "Sonosphère IV. Symfonia Wrocławska" commissioned by IRCAM-Centre Pompidou.