Director Anne Monfort and composer Núria Giménez-Comas have embarked on a two-pronged project based on Anja Hilling's play Nostalgie 2175. On one hand, a stage production, which will tour throughout France from January 2022, on the other hand, a "Music-Fiction" with Ambisonic sound diffusion. For us, they reveal the different issues, including social and ecological ones, that seduced them in the German playwright's text. 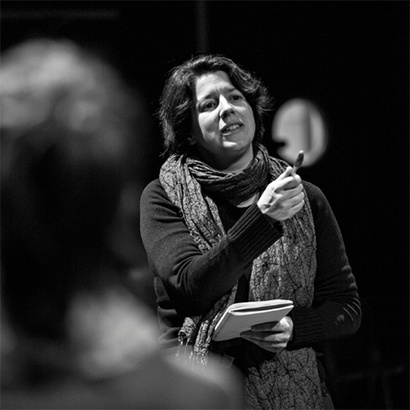 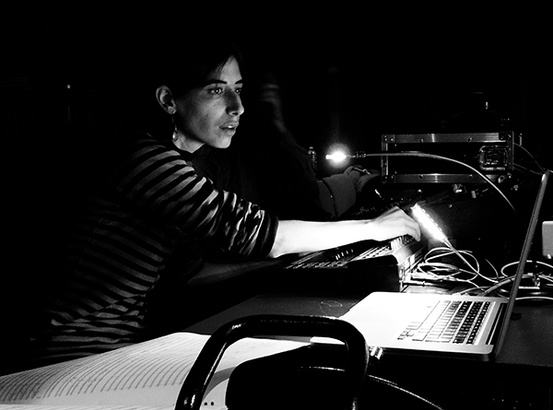 From left to right: the director Anne Monfort (© DR) and the composer Núria Giménez-Comas (© Christophe Egea)

First and foremost, how did you choose Nostalgie 2175 by Anja Hilling?

Anne Monfort: The translators for the French edition of the text, Jean-Claude Berutti and Silvia Berutti-Ronelt, sent it to me before its release. I was already familiar with Anja Hilling's work, and I was drawn immediately to the highly active narrative of Nostalgie 2175, but also to the way the text deals with ecology and catastrophe. She is an author who works a lot on the subject: she only writes about burning forests, talking gardens, or the concerns of flowers, which are much more interesting than those of humans. I immediately wanted to stage the play. As I had the feeling that music could bring another dramaturgical dimension to it, I called IRCAM to suggest it. 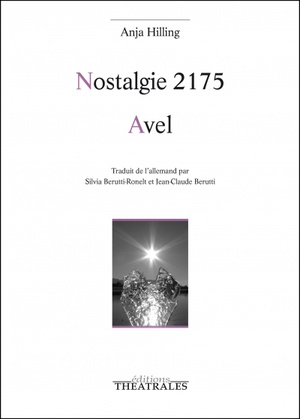 Núria Giménez-Comas: It was IRCAM that put us in touch with them. In fact, at that time, Emmanuelle Zoll and I were looking for a text that would lend itself to a "Music-Fiction", and the proposal came at the perfect time. I read the play and was quickly convinced: I found the poetic dimension I was looking for. I also liked the rhythm created by the dialogues, alternating with a more intimate narration, and the complexity that emerges little by little in the relationships between the characters. The dystopian aspect also attracted me a lot. We were in the middle of a lockdown at the time and what I was reading (especially the impossibility of touching, and of touching each other, imposed by the overwhelming heat that reigns on the earth's surface in the room) was very close to what we were experiencing at the time.

A.M.: So, we decided to do both: a stage production and a Music-Fiction.

N.G.C.: The two formats are in fact very different, notably in the handling of the sound material and the interaction between sound and text.

A.M.: Their structures and proportions also, not to mention, of course, the absence of bodies in the Music-Fiction, and their presence on stage.

The ecological statement made in the text seems to have played a role in your choice. Does the concept of " socially committed artist " seem relevant to you in this respect? Does it apply to you?

A.M.: There was a time, not so long ago, when theater was a bit stuck between two extremes. Performances that could be described as "documentary" on the one side, and shows with an aesthetic vocation on the other, and it was complicated to articulate the two. For me, it is important to speak about reality while ensuring the form: it is in this articulation that my work is engaged.

N.G.C.:  As far as music is concerned, the situation is less straight forward for me. Having said that, I have composed several pieces based on politically motivated texts. Whether we like it or not, whether we are committed to a cause or not, these subjects are realities that we live in our daily lives, which makes them an artistic necessity. Dealing with them is not an objective for me in and of itself, but they inevitably infiltrate my work. Beyond that, it's more a matter of personal, family, or societal experience, or even of historical memory, which then become connected or crystallize following discoveries or encounters, to be materialized in artistic projects.

Do you have the feeling that this kind of work dealing, more or less, with a subject like this one, serves a purpose?

A.M.: With a 70% drop in attendance, it's hard to say! Having said that, I tend to think that the place for political action is outside of artistic enclaves - I guess that's my Germanic side. Activism can be used to raise awareness, but it doesn’t excuse us from protesting at COP 26.

In Nostalgie 2175, the temperature on Earth reaches 60 degrees after a disaster. Humans can no longer live without protective clothing and women cannot give birth without losing their lives. Do you see this dystopia as a fable with a lesson to be learned or a call to action?

A.M.: In reality, the dystopia is only the framework of the drama, like a background. And this background hosts a complex love story, involving three characters. The plot takes place long after the catastrophe, in 2101. And Anja Hilling suggests that humans have adapted to the situation; they have recreated nature artificially, and have continued to move forward. So in many ways the play is not really dystopian: capitalism is alive and well, sexism too... Many details echo our world today, it's sometimes quite strange. The humans of 2175 lead the same life as we do, they go out to bars, they go swimming in a lake (even if it's very expensive). 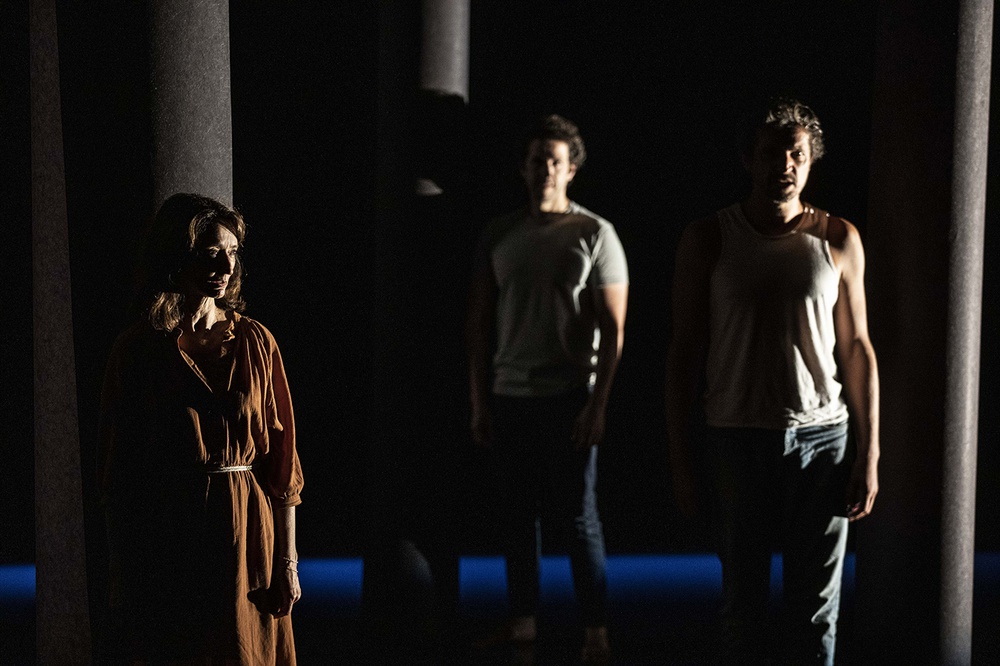 The exciting thing is that, even if the plot takes place in 2175, and Anja Hilling "foresees" this future, it is not really science fiction. It is not a world that is completely self-contained, a world closed in on itself. The play is crisscrossed by slightly delirious breakthroughs, voids, which give one pause for thought and space to dream. For example, we come across a few oddities: like this extreme heat, even though the sun has disappeared, or these ruined but beautiful places in nature, like the lake I mentioned earlier in which our characters are bathing - this is a very joyful moment in the text. We can never really know if it is a real lake, recreated indoors, or the lake painted earlier by one of the characters, an artist.

N.G.C.: Very quickly the academic debate disappears and the relationship between the characters becomes the focus. The practical, everyday moments, the unexpected or surprising phrases, and the references the text makes to contemporary films help to take us away from the seriousness of the story at times.

A.M. : Anja Hilling imagines that in 2175, all that remains of the past are 420 VHS tapes that have survived the disaster. The entire end of the play is filled with scenes from films of all kinds. This is how fiction, in all its cinematic glory, takes over.

N.G.C.: I used these film references musically, which of course give a "lighter", less dramatic feel to the sound and music. I refer to several of these films, such as My Own Private Idaho, Le Grand Bleu, Dirty Dancing, and Plein Soleil, playing with small touches of very connotative musical colors. I also add fragments of my orchestral piece Nostalgia for light, written just before, which I obviously transformed and spatialized, to also bring a "romantic" side to the somewhat "Renaissance" descriptions of the scenes from the films.

How do you manage to achieve artistic freedom from a narrative that might seem to be too preachy?

A.M.: In the play, the catastrophe is no longer a threat because it has already happened. The text itself helps us to avoid having a judgmental tone.

How does one produce this science fiction play? More broadly, what is it "foreshadowing" in contemporary theater?

A.M.: During our first rehearsals on stage, I was able to see how the text resonates. You realize the funny side of this science-fiction hypothesis. You have the feeling that it is the actors who are inventing this completely crazy world. Without doing anything, we are already thrown into the magic of invention.

N.G.C.: For my part, the fact that human beings have adapted by recreating everything artificially gave me the idea of recreating all natural sounds by means of different types of synthesis. I developed artificial and enveloping soundscapes in three dimensions.

Similarly, how can evoke heat or the impossibility of touching using music?

N.G.C.: I have worked in the past on the aural representation of a light. At the beginning of the piece, I created the sonic idea of a very strong light, through the explosion of a high-pitched spectrum, with an accumulation of rattles in the space, buzzing, etc.

For the touch, I was rather interested in rubbings in the space. Rubbings with different roughnesses, at variable speeds, that I transformed and sometimes completely twisted, to the point of making them almost unpleasant.